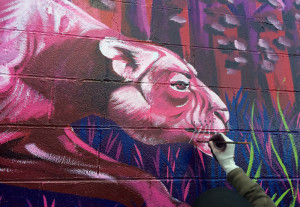 The Leonard Peltier is locked behind bars, but his paintings still manage to see the light of day every once in a while. The Native American political prisoner has languished in prison for decades, still paying an unjust price, his community says, for a fatal encounter during a standoff with federal authorities 40 years ago at the Pine Ridge Reservation. While his imprisonment has catapulted him toward political martyrdom, his supporters have campaigned unsuccessfully for years to win clemency. At 71, the movement elder is still awaiting release–from prison, or from this world. And In the meantime, he paints. His images are one way his soul manages to reach the outside world, and the closest thing he has to an escape route from his bleak surroundings in federal custody.

Yet it seems like even on canvas, he’s still a target of the security state.