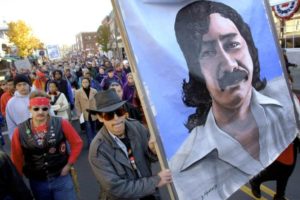 James Reynolds, the former U.S. Attorney in Iowa, contacted the White House and the Department of Justice in a Dec. 21 letter asking that Peltier — now 71 and in failing health — be given a compassionate release.

“I think it’s time,” Reynolds, 77, told the Daily News from his Florida home.

He also admitted he’s not convinced of Peltier’s guilt — even though the activist was convicted of fatally shooting FBI agents Jack Coler and Ronald Williams and has spent the last four decades behind bars.

“I don’t know. Who knows?” Reynolds said, when asked if the wrong man might have gone to prison.

“The hardest thing is to try and go back and reconstruct history. He may not have (done the crime),” Reynolds said, adding that Peltier “would not be the first” to suffer a wrongful conviction.

“When you stand at the bottom and you look at the naked underbelly of our system, it has got flaws. It’s still the best one we’ve got, but at certain points there has to be a call for clemency and that’s where we are,” the former U.S. attorney said.

As for the famously controversial trial for the June 1975 shootings and subsequent appeal from Peltier — which was rejected — Reynolds admitted that “we might have shaved a few corner here and there.”