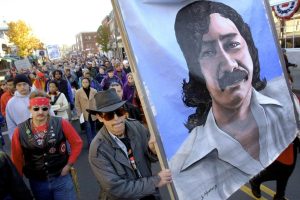 …Peltier insists he didn’t fire the fatal shots that put him behind bars — the shots that felled FBI agents Jack Coler and Ronald Williams during a June 26, 1975 shootout on the Pine Ridge Indian Reservation in South Dakota.

“I was at Pine Ridge that day. I did exchange fire with the authorities who were shooting at us — but I didn’t kill those agents,” Peltier told the Daily News during a visit last week to his high-security facility.

“Of course I feel remorse,” he added. “Nobody should have died that day, the whole thing should never have happened. It was a terrible tragedy.”