Free Leonard: The Story Behind the Bay Area’s Famous Sign 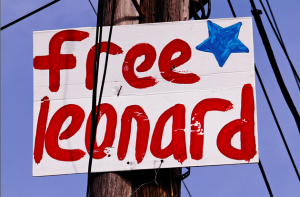 We’ve all seen the bright red “Free Leonard” signs while driving through the East Bay – they’re impossible to miss. The signs, typically lacking any information beyond “Free Leonard,” are a staple along Bay Area roads and have been around so long that they’re pretty much folk art.

After years of passing them by, wondering who the hell Leonard is, I decided to finally do some research.

The truncated version of the story is that Leonard Peltier is a Native American activist and member of the American Indian Movement, currently in prison for allegedly killing two FBI agents during a shootout on the Pine Ridge Reservation in 1975. There is a great deal of controversy around his imprisonment, as it’s dubious what role he played in the agents’ deaths. Freedom fighters and advocates from around the world, like Desmond Tutu and Amnesty International, classify him as a political prisoner and victim of a government cover-up. You can get more details on the website advocating for his freedom. (It’s very complicated, and involves someone named Frank Blackhorse who allegedly should be extradited from Canada.)

Leonard’s case is no doubt heartbreaking, but with countless people on Amnesty International’s Unfair Trials list, I was curious as to why his case remains top of mind despite occurring over three decades ago.

He’s been posting the signs predominantly in view of major roadways since 1999 after attending a powwow that brought Peltier’s situation to his attention. Though he admits he doesn’t participate in any activism outside of this case, he is extremely committed to this cause, braving the warnings of local authorities in order to keep his signs seen.

Peltier’s case has gradually lost steam over the last decade or so, but this hasn’t slowed Gray, who continues to take advantage of media events like the World Series to get his message out. Locals, police, and Native American groups may have varying opinions about Gray’s behavior (as you can see in the comments section of The East Bay Express’ 2011 article on him) but nothing seems to deter him from making and posting his placards. He is committed to continuing the campaign he’s waged for over 16 years.

Next time you see a “Free Leonard” sign, perhaps you will be as compelled as Shane Gray to understand the details behind this convoluted event in American history.