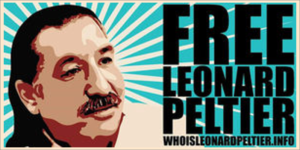 For 41 years, Native activist Leonard Peltier has been falsely imprisoned for a crime he did not commit. As the Obama presidency winds down, the coming months are critical for Peltier’s freedom. Due to failing health and exhausted legal options, it is highly unlikely Peltier will live through another presidency.

This is his last chance at freedom. We must act now, or Leonard Peltier will surely die in prison.

We call on all Native and progressive movements to focus on Peltier’s clemency campaign this October 10, a day nationally celebrated as Columbus Day, as movements across the world push for the celebration of Indigenous Peoples Day instead. In 2015 Leonard Peltier was named the Grand Marshal of Albuquerque, New Mexico’s first Indigenous Peoples Day, in honor of his lifelong commitment to Native freedom and justice. Although he could not march with us physically, Peltier marched with us in the spirit of Crazy Horse.

Let’s pledge, as people of peace and justice, to have Leonard march with his people as a free human and spirit for Indigenous Peoples Day in 2017! No excuses. In the name of justice for 500 years of genocide, dispossession, enslavement, mass incarceration, humiliation, and dishonor, we demand clemency for Leonard Peltier this year!

Join The Red Nation and the Native community of Albuquerque this October 10 for Indigenous Peoples Day and to demand clemency for Leonard Peltier!