I apologize for the time it has taken us to write you about our trip and the wonderful June 26th event in the Oglala district on Pine Ridge, in the Oglala Lakota Nation!
The trip was a car disaster, 2 flat tires from new gravel roads in Nebraska, and North Dakota. We also drove through a variety of weather from Fargo we had a thunderstorm with Tornado warnings; And Great Plains thunderstorm with hail and a 3 hour massive lightening storm that brought us back to Fargo.

But it was worth every piece of hail & lightening to be able to be part of the June 26th Commemoration. It was 43 years ago that the attack on the Jumping Bull’s took place, 3 lives were lost and Leonard is still in prison for being a part of Resistance & Support for the People of Oglala.
It was wonderful and sad to see the honor given Joe Stuntz, Bob Robideau, Grandma Jumping Bull and Waha – Leonard’s son that passed away in DC during the push for Clemency for his dad. And as always the wonderful memories shared by the elders that were living in Oglala during this time.

We were so impressed by the wonderful account that Liz Reinhold and the Commemoration Committee put together. They have been putting this event on for the past 18 years that we are going to let you read it and hopefully you will see the beauty of the land and people that we shared the day with. Many thanks to all those that helped and remembered Leonard and the Resistance of the Oglala Lakota People, then and today! Paulette & Kari Ann 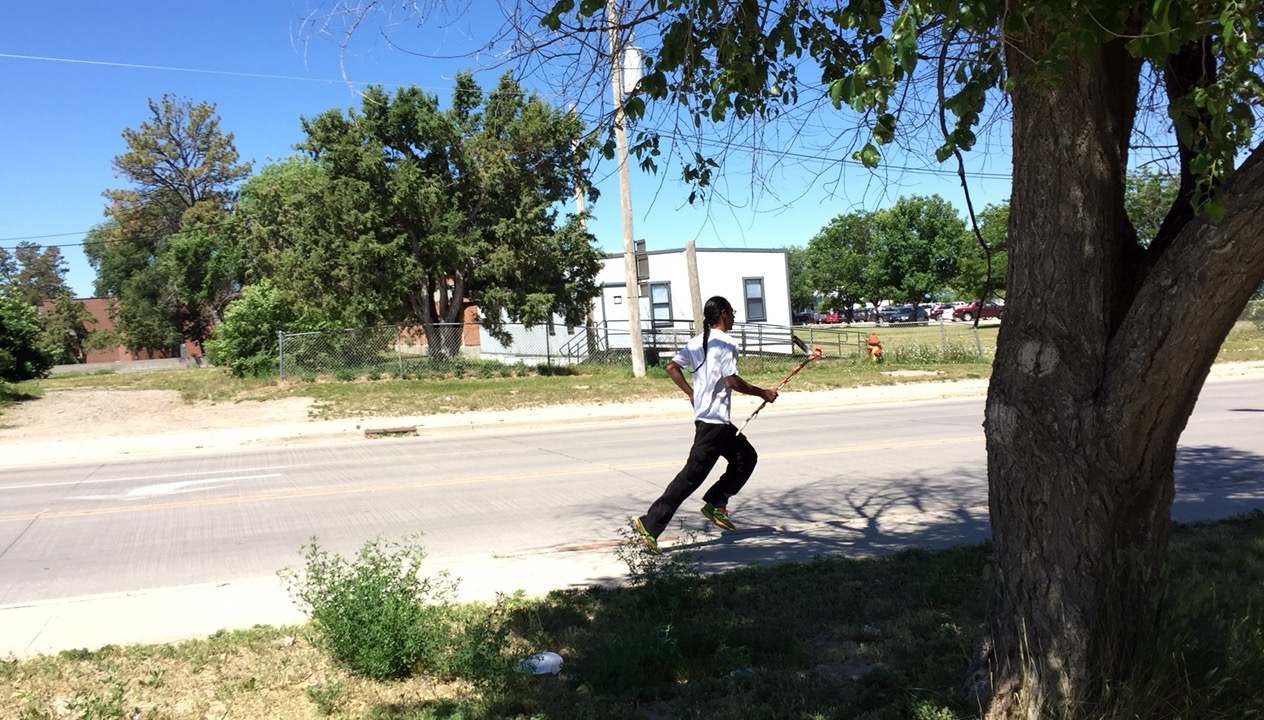 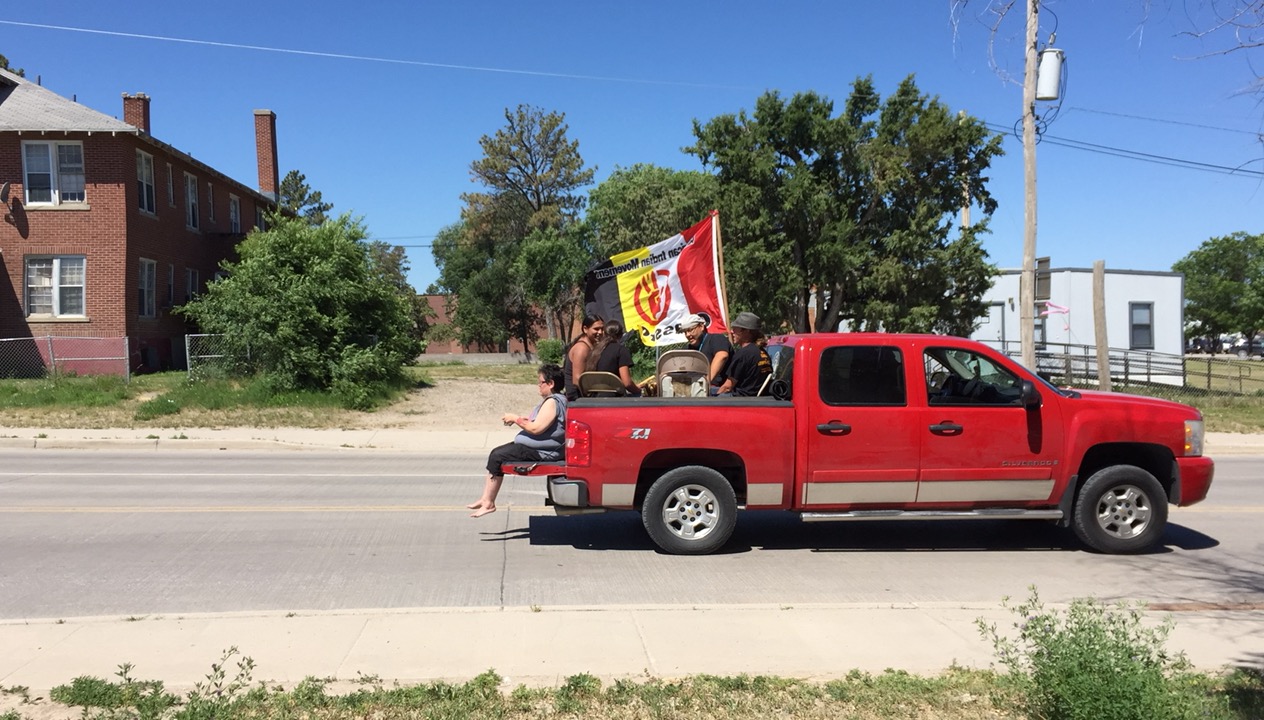 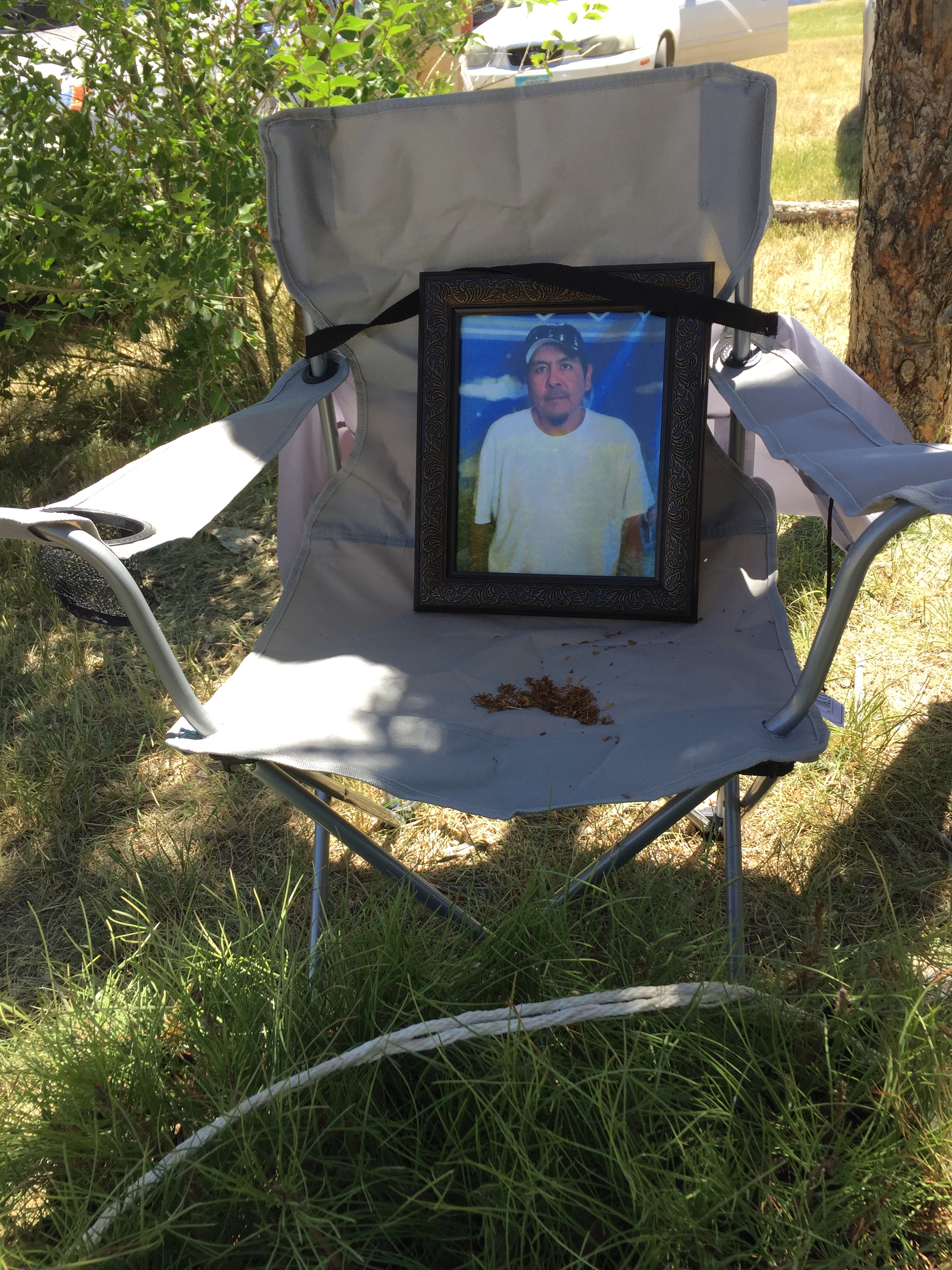 Why we commemorate June 26th:

The American Indian Movement (AIM) was called upon a generation ago by the Oglala traditionalist on the Pine Ridge Reservation to protect the People. Many were routinely terrorized and brutalized. Acts of violence and retaliation played out throughout the community. No one was immune from the cruelty and pervasive violence that gripped the innocent of Pine Ridge. In struggling to maintain traditional values, AIM was sought out to provide assistance and protection from a flawed tribal administration that failed to support its people. The activists sought to align themselves in solidarity with the People against the forces, which sought to undermine the tribal sovereignty of the Oglala Nation. These threats existed not only on Pine Ridge, but also in countless other Nations throughout Indian Country.

Answering the call for help, many traveled great distances to lend support and protection. One such individual was Leonard Peltier. As with many, it was Leonard’s desire to defend and protect the traditional people’s right to exist and thrive that brought him to Oglala. The events of June 26th are forever emblazoned in the consciousness of all Oglala’s; it is this date that has forever changed and affected not just Leonard’s life, but the life of all Indigenous Peoples struggling for the right of self-determination and sovereignty.

Though Leonard is incarcerated, separated from his family and community, he tries to maintain a positive outlook and feel hope for the future. It is this spirit of hope that Leonard believes will heal Native Nations and unite them in the protection and preservation of sacred ceremony, culture, language, and the responsible stewardship of the land and its resources for the generations yet to come.

The Oglala Commemoration Committee’s goal is to honor Leonard’s wishes and to actively promote these beliefs and values. The Committee, through is efforts, will maintain its goal, to not forget the events of June 26th, to commemorate the events leading up to this tragic day and the resulting impact. The Committee wishes to respectfully commemorate those who have made the ultimate sacrifice in defense of the people.

18th Annual Oglala Commemoration – June 26, 2017
Greetings, this years’ event marks the 18th Annual Commemoration. Again, this year’s event was a success. With everyone’s hard work and pulling together, we paid our respect and honored those who have made sacrifices in the struggle for Indian sovereignty and self-determination. This year we again honored our Committee Chair, Roselyn Jumping Bull by placing a bench in the newly constructed arbor. We as well honored the life of Paul Waha Shields, (Leonard’s son) and the Red Warrior Camp of the Water Protectors.
Under blue skies and a gentle breeze, the 26th began with the AIM Grassroots (AIM Peji Wahuta) hosting the 4rd Annual Leonard Peltier Freedom run. All who had gathered to greet them met the runners at the Little Family Cemetery.

Committee member, Fred Cedar Face, welcomed everyone, provided a brief history of the events of June 26th and reminded us of the importance of what it is that we were there to commemorate as well as to send prayers up for a safe event. AS they runner arrived, Fred welcomed them into the circle, offered prayers and invited all to shake hands with the runners. Our greatest respect to these runners, of which, many were children; you have our sincere thanks and respect for your sacrifice.

The Ta Oyate Olowan drum provided an honor song to conclude events at the cemetery and sang as the walkers made their way up to the Jumping Bull Property. Leading the march were staff carriers, followed by the walkers and the vehicles. Commemoration Security provided security and traffic control for the walkers and caravan of cars. The walk concluded at the Jumping Bull property. At the property, the walkers were offered cold drinks, fresh fruit and granola bars. Ivis Long Visitor welcomed everyone on behalf of the Jumping Bull family, and served as the host.

Roselyn Jumping Bull was honored by the Committee with the presentation of a memorial bench draped in a gorgeous star quilt in honor Roselyn and all the grandmothers who have supported Leonard throughout the years. The star quilt was presented to Roselyn’s longtime friend, ___ Brave. As a gift to the people and in honor of Roselyn, musician, Dale Hanabarger, played Roselyn’s favorite Neil Young song, Harvest Moon.

Marking the passing of Paul Waha Shields, Henry Red Cloud shared fond memories of Waha and spoke of Waha’s desire to provide a safe and secure future for his children. Our prayers go out to Waha’s family. In memory of Waha, Henry brought pine trees and handed them out to attendees to plant.
AIM Grassroots honored the Water Protectors, and star quilts were presented to the Guy Dull Knife, Cuny Dog, and Olawin Martinez accepting on behalf of Deb White Plume for the Water Protectors.

Eileen Janis paid respect and honored Roselyn Jumping Bull, again, reminding all in attendance the importance of the Commemoration and Roselyn’s unwavering support for both the Event and the Committee. In keeping with the vision of supporting the children, the Committee presented Eileen with a basket of shawls for the Sweetgrass Foundation.
Paulette D’auteuil Robideau, of the LPDOC, read Leonard’s statement, and family members walked around Memorial cakes. In honor of Roselyn, Waha, and the Water Protectors, the cakes were cut and shared.

As it is Leonard’s long held belief that the future of all indigenous communities are dependent upon the success of the children, the backpack and school supply giveaway was held in Leonard’s honor. We doubled the number of backpacks from last year and still ran out. Our goal for 2018 is increase the number so we anticipate putting out a call for more school supply donations.
In keeping with Roselyn’s longtime wishes that the children not be forgotten, the children’s toy giveaway was held in Roselyn’s honor.
The event at the property concluded and all attendees were invited to share in a community meal and listen to the musicians at Bro. Rene Hall.
Providing a delicious meal at Brother Renee Hall, the cooks:
Winona’s Kitchen, Oceti Shakowin Camp,Carla & Christy from Camp Justice,
Jordan & Marceline,Sacred Stone School, Belva Janis
Thank you ladies for all your hard work! The meal was delicious and very much appreciated.

Thanks go out to two-thirds of SpyderZback Owen & Timmy, Dale Hanabarger, and Michael Koch provided musical entertainment.
In the flurry of activity, we overlooked announcing the 2017 winner of the Leonard Peltier Honorary Scholarship, Gina Johnson., a GED student who is continuing her education at the Oglala Lakota College, majoring in Information Technology. Our Congratulations go out to Gina; we wish you all the success.
Many thanks to everyone who planned, traveled, cooked, volunteered, cleaned, and made music to commemorate the 42nd Anniversary of the Incident at Oglala.

We would like to thank all the families locally involved and who have supported us through the years: Jumping Bull, Long Visitor, Little Family, Black Elk, Good Voice Elk, Cedar Face, Blacksmith, Cheyenne, Roach, Red Shirt, Star Comes Out, and the Janis families.
Our thanks to the Ladies and Gentlemen of the Peltier Support Groups (U.S. and International) and AIM Grassroots (AIM Peji Wahuta).

Thanks to:, Eileen Janis, ILPDC, AIM Grassroots Peltier Support Groups, Our Lady of the Sioux & Sr. Barb, Wal-Mart Chadron, the Parchcorn Family, Naomi Carranza, Keith Rabin, Jerry Flowers, and Cakes Etc. (Chadron), Julie Summers, Cee and Cassie for filling backpacks, and to all those who donate auction items and to those who placed bids. In addition, to those groups and individuals who have donated Pow-wow booths, Lake Shawnee Pow-wow, Black Horse Pow-wow and the Great River Eagle Days Pow-wow.
Our sincere thanks to the Jumping Bull & Long Visitor families for allowing us to continue to honor Roselyn’s wishes and their unwavering support. We miss Roselyn greatly and are appreciative of the unconditional support that her family has provided to the Committee these past 18 years.

Most important, we wish to thank Leonard Peltier for the sacrifice of his freedom, his faith and belief in the youth and his continued support of the Committees efforts on his behalf. Our greatest respect!
With respect,
Lisa R