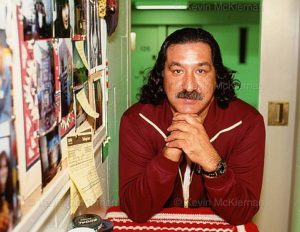 Leonard Peltier has petitioned President Obama for clemency, asking for an end to 41 years in captivity. Convicted of aiding and abetting the 1975 killing of two FBI agents, Peltier saw his clemency request to President Clinton in 2000 blocked by FBI agents’ groups. The 72-year-old leader of the American Indian Movement hasn’t been allowed to see a reporter in almost a decade, and the writer took this photo of Peltier in Leavenworth in the mid-1990s.

I don’t know which Native Americans killed FBI agents Jack Coler and Ronald Williams in the notorious 1975 shootout in Oglala, South Dakota. Nor do I know the identity of the federal lawman who shot and killed Joe Stuntz, the American Indian Movement (AIM) member. But what is troubling is that federal prosecutors don’t know either, yet Leonard Peltier has spent 41 years behind bars for the FBI agents’ deaths. Now, in the waning days of the Obama administration, Peltier has petitioned President Obama to commute his sentence.

I was there on the Jumping Bull ranch on that hot June day in 1975 when some of the bullets were flying, and I’ve been able to interview Peltier several times since then, most recently from Florida’s maximum-security Coleman penitentiary. The audio file of that conversation is below, and edited-for print extracts follow this story.

Over the last four decades, many groups, including Amnesty International, have advocated for Peltier’s release. Amnesty maintains that Leonard Peltier, who is 72 and in ill health, did not get a fair trial. The former director of Amnesty International U.S.A., Jack Healey, has produced 11 video testimonials for Peltier’s release in recent years from famous actors and musicians, including Ringo Starr, Bonnie Raitt, Harry Belafonte, and the late Pete Seeger.

Over the course of his imprisonment, Healey said, high-profile advocates such as Nelson Mandela, Desmond Tutu, Mother Teresa, and actor Robert De Niro all have lobbied the White House to free Peltier. In the last six months, he said, Robert Redford, who produced the documentary Incident at Oglala about the 1975 shootout and its aftermath, has met with President Obama to make the case in person. A former Franciscan priest, Healey said he is sending a message to Pope Francis through his friend Boston Cardinal O’Malley: “If I can reach the Holy Father to reach President Obama, I’ve done my job.”

Listen to the author’s recent interview with Leonard Peltier:  https://soundcloud.com/sbindy/leonard-peltier-interview