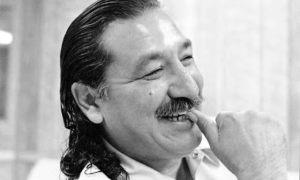 Approaching the Standing Rock Reservation to stand with the Water Protectors, you couldn’t miss the dramatic display of tribal flags flying high along the dirt driveway and surrounding the perimeter of the large campgrounds. Scattered between hundreds of flags are banners bearing messages such as: Mni Wiconi, “water is life” in the Lakota language.

Also scattered among the flags were banners calling for the release of Leonard Peltier, a Native American who has been in jail for more than 41 years, unjustly convicted of the 1975 murders of FBI special agents Jack Coler and Ronald Williams on the Pine Ridge Reservation in South Dakota. Barack Obama just pardoned or commuted the sentence of 231 individuals on Monday, and Peltier was not among them.

We represent Leonard Peltier in his 2016 clemency petition, which asks Obama to allow him to live his final years at home on the Turtle Mountain Reservation in North Dakota. Mr Peltier is old, ill and a threat to no one. The petition seeks his release in the interests of justice and reconciliation and is supported by Nobel Peace Prize laureates, humanitarians and scholars. Rights groups have embraced his cause, including more than 100,000 people who have signed an Amnesty International petition calling for his release.
Read more at https://www.theguardian.com/commentisfree/2016/dec/21/leonard-peltier-clemency-obama-pine-ridge.
Donate Now