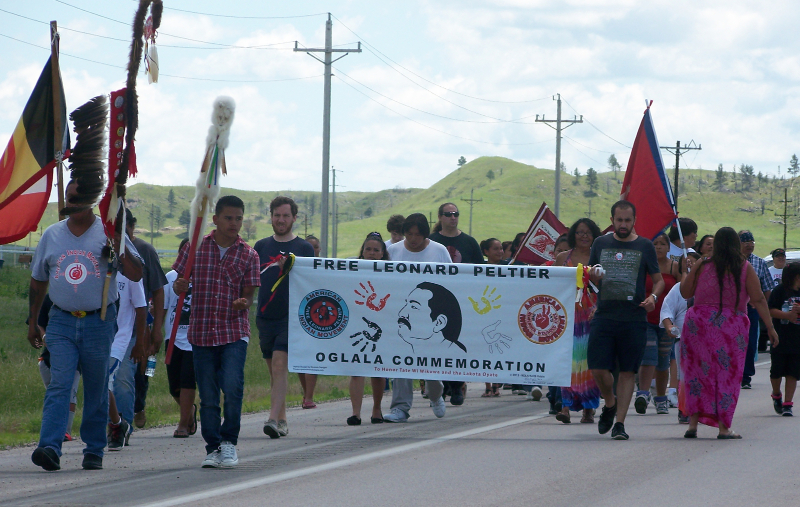 Greetings to all, this year’s event was a success and many thanks to everyone who planned, travelled, cooked, volunteered, cleaned, made music, ran and danced to Commemorate the 40th Anniversary of the Incident at Oglala. This year’s event was marked with loss, after illness, Roselyn Jumping Bull, our Committee Chair walked on. Roselyn’s passing has left a void in our Committee and we are grateful to her family for allowing us to continue with the Commemoration. We miss Roselyn greatly and are appreciative of the unconditional support that she and her family has provided to the Committee these past 16 years, and will provide in the years to come.

In preparation for the event on the 26th, the Committee and the Community gathered to set the agenda for the following day. The 25th promised to be a busy day of running around and preparing for the following day’s events; we began this year by kicking things off with the Leonard Peltier Support Group Forum; in attendance were like-minded individuals who came from near and far. Leonard’s son, Chauncey, began the meeting by communicating to the group the focus that all the groups are to take in promoting the “Road to Clemency” Campaign for Leonard. Rounds were made; all in attendance were afforded the opportunity to introduce oneself and to speak their thoughts and plans for Leonard’s Clemency. The meeting then moved on to the Oglala Commemoration Committees planning meeting in which the Committee discussed the agenda for the events on June 26th. The Committee then shared a meal for those present.

The 26th began with the AIM Grassroots group from Rapid City hosting the 2nd Annual Leonard Peltier Freedom run; joining the runners was Chase Iron Eyes who co-sponsored the Freedom Run. The runners persevered through the distance and heat and were met at the Little Family Cemetery to resounding support. Our congratulations to these runners for completing this endeavor, and our thanks and respect for their sacrifice.

We had a great turnout at the Little Family Cemetery; there were as many cars as there were walkers. As with every year, while waiting to get things rolling, we visited with old friends and made new ones. Attendees were asked to circle up so that the Commemoration event could begin. Prayers and words were shared by Committee member, Fred Cedar Face, welcomed everyone and reminded us the importance of what it is that we were there to commemorate as well as to send prayers up for a safe event, Leonard, Roselyn and for much needed healing throughout the community. Fred provided a brief history of the events of June 26th, and the lasting impact of that day which so affects many still.