I Will: Sting and Peter Gabriel 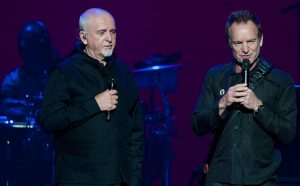 Last night at the Verizon Center in Washington, DC, Sting and Peter Gabriel played a video made especially for them by the Human Rights Action Center’s I Will Campaign in support of Leonard Peltier’s clemency. The public service announcement (PSA) showed at least five times while the 20,000 plus seats were filling up.  The last two times the PSA showed, the arena was packed.

We hope these artists will show the PSA again and again as they move across the United States and Canada during their Rock Paper Scissors Tour.

Thank you, Sting and Peter. You can’t know how much your support means to Leonard.