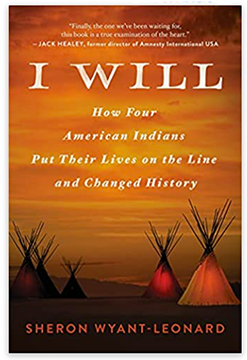 I WILL by Sheron Wyant-Leonard

When the last gunshots of the Indian Wars of the nineteenth century faded away, a dark and desperate time began for Native American people. Poverty, neglect, and hopelessness hung over the land. But as the seventies dawned, a powerful movement for change by newly urban Indians was born with the words “American Indian Movement.” This story includes a brief look at their childhoods as told by the people who lived it, including their government boarding schools, reservation life, the fight against termination, and the founding of their resistance with building takeovers and government saboteurs, a prison escape, including the largest FBI manhunt in history. They walked the line between courage and fear and changed the direction of Native history forever.

All purchases are final. All prices are in U.S. dollars. For international orders, you can change your currency in the Paypal checkout. Shipping fees are calculated in the Paypal checkout. We generally use USPS First Class mail to keep our operating costs as low as possible and we use eco-friendly shipping materials when possible.