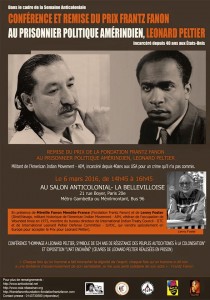 PRESENTATION / Since 2011, the Frantz Fanon Foundation has awarded the Frantz Fanon Prize to individuals who engage in or have engaged in exemplary action in denouncing racism, discrimination and xenophobia, domination and alienation, and who also represent the values of ethical commitment against colonialism.

The 2016 Frantz Fanon Prize will be awarded at the Salon Anticolonial, to be held March 6, 2016 – 2.30pm, at the Bellevilloise in Paris (France) as part of the annual “Anti-Colonial Week” nitiated by the network “Sortir du colonialisme.”

This year the Frantz Fanon Prize will be awarded to Native American political prisoner Leonard Peltier, who is entering his 40th year of imprisonment in the United States for a crime he did not commit.

Leonard Peltier symbolizes the struggles of native peoples in the Americas. He is supported by numerous leaders and organizations around the world, including President Evo Morales, and Amnesty International considers him a political prisoner who “should be immediately and unconditionally released.”

The 2016 Frantz Fanon Prize will be given to Lenny Foster for Leonard Peltier by Mireille Fanon Mendès-France, daughter of Frantz Fanon, President of the Frantz Fanon Foundation, representative of the international NGO : IADL | International Association of Democratic Lawyers and Chairperson of the United Nations – Working Group of Experts on People of African Descent.