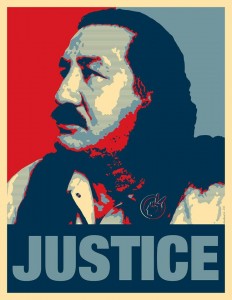 There will be a staged reading of My Life is My Sundance, written by Leonard Peltier and edited by Harvey Arden. The reading will take place at the Aurora Fox Theater, 9900 E Colfax Avenue Aurora, CO 80010 on March 31, 2016, at 7:30 PM. The event is to renew the voice and innocence of political prisoner Leonard Peltier, internationally known Native American who has been in prison for 40 years despite strong evidence of his innocence. Acclaimed Native American actor and community leader Doug Goodfeather will read passages from the Play. Doug Goodfeather is also currently appearing in the play Black Elk Speaks, produced and directed by well-known local actor, producer and director Donnie Betts. Doug also starred as Leonard Peltier in an earlier production of the play based on the book in 2007 in Boulder. Musical performances by the Goodfeather Drum Singers , Silent Bear, and Elena Klaver. Elena and Silent Bear have written songs for Leonard Peltier and have are long-time supporters. Production is provided by Indigenous and human rights activist Keith Rabin, Sr., who was on the Pine Ridge reservation in 1974 during the so called “Reign of Terror.” The staged reading is produced by Keith Rabin, Sr., and the Fox Theater. Tickets are only $5, and can be purchased online at http://aurorafoxartscenter.org/2016/03/11/my-life-is-my-sundance/.

As the event is to raise awareness of and to ask for your support, at this important time for Leonard, with possible Political avenues for release.

An area for direct donations as well as information on peltier support groups will be at the theater. Books and Art work will be available for sale to help support local work on Leonards behalf and help with costs for this event. For more information on Leonard Peltier and his situation, please read the book, My Life is My Sundance, as well as Peter Mathiessen’s book, In the Spirit of Crazy Horse. For more information on this one night event, Leonard Peltier, or how you can support please contact Keith Rabin, Sr., at Keith@mylifeismysundance.com or any of the support groups.

This is a drug and smoke free event.