It is with great sadness in our hearts that we must announce that AIM sister Jean-Ann Day has passed over. We extend our condolences to Jean’s family and friends.  Safe journey, Jean. 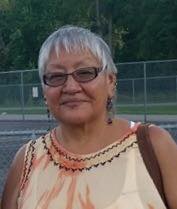 Jean-Ann lived her life the traditional Ho-Chunk way. This was both the center of her life and her way of life. She loved sports and was always present for and took pride in all of her grandchildren’s games and activities.

Jean-Ann moved to Oglala in 1975 to support and protect the traditional people who had requested help from the American Indian Movement. She witnessed the shoot-out aftermath on Pine Ridge, and survived the reign of terror. Later, she was a National spokesperson for the Leonard Peltier Defense Committee in 2000 when she coordinated his drive for executive clemency. After she left Oglala, Jean-Ann organized The Longest Walk that left San Francisco in February of 1978 and arrived in Washington DC in July. The hundreds of walkers were joined by thousands of Tribal people who were then organized to successfully lobby the Indian Child Welfare Act, the Indian Self-Determination Act and the American Indian Religious Freedom Act. These three pieces of federal law are the foundation of modern sovereignty.

Jean-Ann’s work in the 1970’s continued as a commitment to health and healing for her people. For the past 30 plus years she has worked for prisoners’ rights. She coordinated talking circles for the people behind the bars. Making contacts with families to assist the families. And taking food (traditional) to the talking circles. “For three years it was my life to do this work.”

Over the course of her life Jean went on to school to gain a degree in Sociology (BS) and then a Masters in Human and Community Resources. For Jean-Ann, education was a way to show the strength of Ho-Chunk people. She has always worked in the field of Social Work and Services. Jean has been both the Executive Director and the Divisional Director of the Ho-Chunk Nation’s Social Services, a department which looks at all aspects of Ho-Chunk Life from when a child come into this world, through childhood into the needs of young-adults and, finally for the elders. It was important to Jean-Ann that the goals and objectives are characteristic of the Ho-Chunk Nation’s inherent cultural traditions, customs and values. As Director she started programs to protect women from domestic violence and heal from trauma and sexual violence. Most recently, she was working to develop a healing center for Ho-Chunk youth and their families, and people who are returning from prison.

Another focus of Jean-Ann’s work was the passage of the Wisconsin Indian Child Welfare Act. This law protects the well-being and self reliance of the Ho-Chunk children, families, communities and the Ho-Chunk Nation. It has become a model to protect the welfare of Native children throughout Indian country. Jean was active in International Indigenous Rights work. Over the years, she attended the United Nations Permanent Forum on Indigenous Issues. Here, she worked on the UN Declaration on the Rights of Indigenous People. In all of this work she made many, many friends all over the world and she would travel to their homelands to support the struggles of their people.

When asked to describe her life, Jean-Ann said simply, “My life has been for the people and that is the way I live my life.”