Billy Frank, Jr., a recipient of the
Medal of Honor 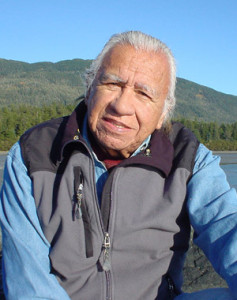 Treaty rights activist Billy Frank, Jr., will be posthumously awarded the Medal of Freedom by President Obama on November 24, 2015. Billy Frank, Jr. was a tireless advocate for Indian treaty rights and environmental stewardship, whose activism paved the way for the “Boldt decision,” which reaffirmed tribal co-management of salmon resources in the state of Washington. Frank led effective “fish-ins,” which were modeled after sit-ins of the civil rights movement, during the tribal “fish wars” of the 1960s and 1970s. His magnetic personality and tireless advocacy over more than five decades made him a revered figure both domestically and abroad. Frank was the recipient of many awards, including the Martin Luther King, Jr. Distinguished Service Award for Humanitarian Achievement. Frank left in his wake an Indian Country strengthened by greater sovereignty and a nation fortified by his example of service to one’s community, his humility, and his dedication to the principles of human rights and environmental sustainability.

Billy Frank was instrumental in securing the steadfast support of U.S. Senator Daniel Inouye – also a Presidential Medal of Freedom recipient and Congressional Medal of Honor [highest military and civilian honors of the United States] awardee – in personally calling upon American Presidents to grant clemency for the release from prison of LEONARD PELTIER.

In our opinion, the best honor Mr. Obama could bestow on Mr. Frank is to grant this elder’s wish.