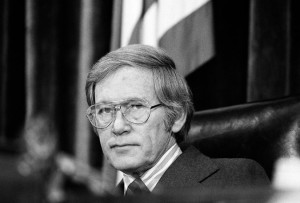 We are saddened to learn of the passing of former Congressman Don Edwards. A former FBI Agent, Congressman Edwards was a strong advocate for Leonard Peltier. He strenuously argued for a new trial and, ultimately, clemency for Leonard Peltier. A decades long champion for civil and human rights, Congressman Edwards passed away on Thursday at the age of 100. In 1994, Mr. Edwards summed up his record to The San Jose Mercury News. “It is the irresistible impulse of government to assume more power,” he said. “My role has been to say no.”

Former FBI Agent and Congressman Don Edwards had the courage to speak out on behalf of justice for Leonard Peltier.  Edwards stated:

“I took a personal interest in Mr. Peltier’s case and became convinced that he never received a fair trial. Even the government now admits that the theory it presented against Mr. Peltier at trial was not true… Leonard Peltier has served an inordinate amount of time and deserves the right to consideration of his clemency request on the facts and the merits. The FBI continues to deny its improper conduct on Pine Ridge during the 1970’s and in the trial of Leonard Peltier. The FBI used Mr. Peltier as a scapegoat and they continue to do so today. At every step of the way, FBI agents and leadership have opposed any admission of wrongdoing by the government, and they have sought to misrepresent and politicize the meaning of clemency for Leonard Peltier.”