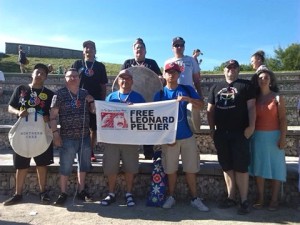 On june 27th and 28th, 2015, members of the Leonard Peltier Support Group / CSIA-Nitassinan travelled to the city of Ornans where the organisation Four Winds organized an Pow Wow with more than 30 Native American Dancers, from different indigenous Nations within the USA. This year’s Pow Wow invited the famous Northern Cree Drummers, who travelled all the way from Canada with their drum.

At this Pow wow (which was taking place at the same time than the Pow wow at Oglala), our Leonard Peltier Support Group / CSIA-Nitassinan had the opportunity to present our organisation and Leonard Peltier case in front of 200 people.

Our friends of the organisation “Pine Ridge Enfance Solidarité” helped us distributing hundereds of postcards adressed to President Obama asking for clemency for Leonard Peltier.

At the end of the Pow Wow, the Grammy Award Drum group, Northern Cree Singers made a picture with our “Free Peltier banner” to show their solidarity with Leonard and the Oglala Commemorations. They hope that this picture and their prayers will be sent to Leonard.