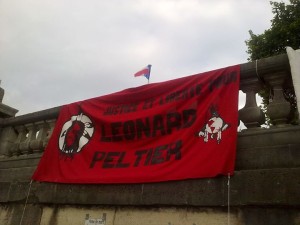 Solidarity in France with the commemorations to Oglala (40 years old of the shooting at jumping bull that resulted in the incarceration of Indian Activist, Leonard Peltier for a crime that he has not committed).

Ornans
– the 27 and 28 June, the support group to Leonard Peltier of CSIA-NITASSINAN WILL TRAVEL TO POW-wow ornans, organized by The Association 4 winds, where will participate many Indian dancers from the four corners Of Turtle Island. The group of drum invited are the famous Northern Cree Singer, who have on several occasions demonstrated their solidarity with Leonard Peltier.

Paris
– on 27 June, in Paris, the case of Leonard Peltier will be referred to in international meeting for the defence of revolutionary prisoners, organized by the c.r.i. red. A campaign of Collage of Poster In All of Paris has been achieved where you can see the portrait of Leonard Peltier, alongside those of George Abdallah, Mumia Abu Jamal, Ahmad Saadat…