Leonard Peltier, “I Will Ask – Will You?,” Clemency Video Released 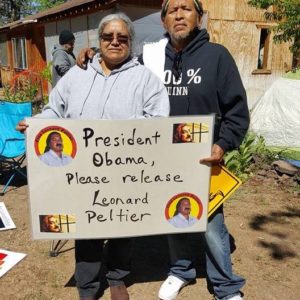 NEW YORK – The “I Will Ask – Will You?,” clemency for Leonard Peltier began in 2012 after Harry Belafonte and the late Pete Seeger held a concerrt Peltier in the Beacon Theatre in New York City.

Jack Healey who was the former director of Amnesty International USA came to deliver the opening remarks and he suggested a different approach to seeking Peltier’s freedom. He had worked to free Nelson Mandela and Aung San Suu Kyi of Burma and others and he felt that it was time to seek freedom for Peltier simply based on his age, his declining health and his time served. Leonard had been in prison for 36 years at that time and it was clear that he had exhausted all of his possible legal options.

The producers decided to drop the legal arguments and leave that to Leonard’s lawyers and his committee. The questionable issues surrounding his trial and later appeals have been well documented. So under the banner of Human Rights Action Center we set out to make these PSA’s.