The famed Native American activist and political prisoner spoke with the New York Daily News about his time in jail and hope for the future. 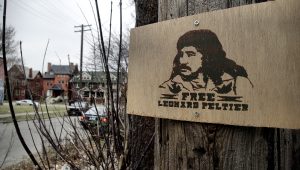 Leonard Peltier, the famed Native American activist who has spent four decades in prison, suggested in an interview published Monday with the New York Daily News that he’s paying the price for having fought for the value of Indigenous lives.

“That’s what we were always fighting to change—the idea that Indian lives weren’t worth anything,” said Peltier, who questioned why no one was brought to trial for the death of Joseph Stuntz, a Native American killed in a shootout with the FBI, but he was sentenced for life for the death of two agents in the same incident.

Peltier was a leading figure within the American Indian Movement or AIM, a militant group championing Native American autonomy and culture, during its peak in political activity in the 1970s.