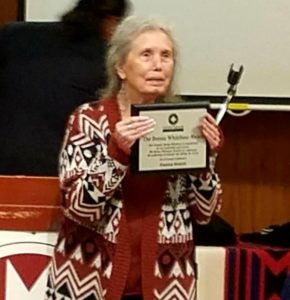 I was very happy to receive an announcement about a close native friend and longtime ally in the native struggle, Ramona Bennett, receiving the Bernie White Bear award. I want to send my personal congratulations to Ramona Bennett from the Puyallup Nation; Ramona, you earned it and deserve it!  Ramona, you stood out there in the front lines with us and some of those lines were very dangerous. First let me say I did not know there was an award given in Bernie White Bears name every year, I find that very cool. Thanks to the people for organizing it. “it’s awesome!” He also earned it, he paid his dues. As I read the presentation about Fort Lawton events it brought back many memories of everyone, some were pleasant and some not so pleasant but hell we were all young and full of determination to save our culture our Native Nations it was a critical time for us as the US government was enforcing the complete termination of all Native Nations.

In 1953 Dwight Eisenhower signed into law THE AMERICAN INDIAN TERMINATION ACT (A.T.A.) It was to be completed by 1985. We were to no longer exist as human beings or American Indians and we would just become a footnote in history.

The Government and Media had been claiming through there propaganda machine they did not know what was happening to us, Native Peoples were just disappearing (YES, it’s true research the long ago defunct publication, LOOK MAGAZINE LATE 1950) Ran many articles on the disappearance of the American Indian. Time was running out for our Race of People here in the USA. Hell, even as it was, we weren’t allowed to own a business on the reservation. There was a law called THE AMERICAN INDIAN GUARDIANSHIP LAW, this law was created and signed into law because massive oil fields were found on the Osage barren lands of rocks and unfarmable territory. The Osage became extremely wealthy and this law took all their wealth away.  This law allowed white men, who for a fee, could be appointed guardians by the Superintendent of the B.I.A. office in Osage Territory. We were not allowed to even buy a tube of toothpaste without our guardian’s permission.  Hey, isn’t that a slave Law?

In 1953 Eisenhower had some of those Anti-Indian laws repealed, but then 6 months later he signed the A.T.A so it was a race for time that was rapidly running out for Indian People. 1985 was right around the corner. So, my generation, following the one before us, stood there with my father and elders in 1958 resisting termination. I was involved at 13 yrs. old on the Turtle Mountain Chippewa Nation, who after the Wisconsin Menominee’s was next to be terminated, anyway so we (my generation) stepped into their shoes as they, grew old and tired and some afraid to die in prison we took over in their place. Many had they grown old and many had passed on.

One of our main goals was to get our treaties honored and in one of the treaties was the statement that any surplus government lands they didn’t want was to be returned to Indian People. So, in Seattle we looked at Fort Lawton, the government wanted to sell it to the city for one dollar supposedly to make another park but we knew this prime land was going to be developed by the wealthy and even the city knew this. The city didn’t want the land as they could not afford or support another park. Instead they said give it to the Indians, see if they can do something with it. I had met Bernie, Fred lane, Ramona and many others tin Seattle. Please forgive me for not mentioning your names, there are just so many wonderful and great people who were determined to save our Nations. They earned an honorable mention, we were all young and believed nothing was going to buy or scare us off. We were in it to the end, some of us did not expect to live through this struggle some didn’t, some good, strong, loving brothers and sisters, were killed. So, we chose Fort Lawton (F.L). We went through the proper channels, we filed for ownership of the fort under the treaty and all we received for answers was to be laughed at. The government told us the treaties WERE NO GOOD. We knew we could not appeal this decision as there was nowhere in government to appeal it too. So, we decided to go to the people and we chose to occupy the land and the fight was on!  We went into it in a peaceful way we didn’t go armed.  We even decided the first time to not even take a book of matches (Ramona, remember those decisions we all made) and we told the military that there would be unarmed women, men even children would standing together fighting for our rights as a people, as a nation, to be free to be allowed to live on as a race of Peoples, on our lands!!  So we went to Fort Lawton with just our drums and songs and the clothes on our backs  and they confronted us and hey, it’s all documented with machine guns and get this “flame throwers”!  Check out our archives read this for yourself, Flame throwers! Many of the People with us did not know what they were those of us who was in the military knew right away what they were and it pissed us off; you dare point those weapons of mass destruction at our women and children. But Bernie and others calmed everyone down reminding everyone we were unarmed and there would only be mass death on our side if we did anything. So, we surrendered and when they arrested all us there were white and black soldiers the Indian soldiers refused to be part of this mass arrest. I got in the face of this black soldier and told him he wasn’t anything but an uncle tom or house nigger, and reminded him that I and many of us marched with his people for their rights, that’s why Dr. King mentioned Native People in many of his speeches! During the time, we occupied the fort 5 of us were singled out as the leaders by the army: Bernie, Stand Holder, Myself, and two others. We were held back by the soldiers and put in the stockade and were attacked by these same soldiers. The one black one came after me and when he saw it was not going to be a walk in the park, he screamed for help. I knocked him to the floor, some one hit me from the back knocking me to the floor, He was up and jumped on me and had me pinned to the floor and was going to give me one hell of a beating. Stand Holder came to my rescue and threw an upper cut and he went flying off of me and I was on my feet and started to kick the shit out of him and went after one of the guys Stan was fighting as he had three or four people on him. Finally, the officer in charged came in and ordered his men back. Poor Bernie was beaten so bad he was hospitalized they had dislocated his shoulders. As warriors we understood we would/could be hurt or killed for our people and we accepted that. Most of us took an oath on the sacred Chanupa to protect our women and children and follow the warriors path giving with our lives if need be. We hoped this would never be the case but the beatings we received were part of it all. Bernie, I and others had a meeting with the colonel of the fort and told him that we would not tolerate their harming our women and children and to please inform his soldiers.

After we were released form the stockade and met up with everyone we found our women and some of the children were beaten and women disrespected having their clothes deliberately torn off uncovering and exposing their beast. Ramona was one of the women assaulted in the fourth occupation. Bernie and the rest of us in the leadership did not want to go in unharmed and treated like this again and were ordered not to go in and so we stayed back and there was violence again and this time someone did bring matches and they started to burn down the soldier’s barracks. it was a pleasant sight for many of us to see the barracks going up in flames

When they again brought out their flame thrower and machine guns we let them and the media know it was on and we would begin to arm ourselves! We knew they would eventually use their weapons against us, our native history is well documented with these facts. Killing children means nothing to them. I mean a couple of years later they showed us what happens to peaceful unarmed demonstrators at Kent state they machine gunned down their own children. The National and state government knew the support we were receiving from non-Natives folks who were coming forward and telling them, they stood with us by any means necessary. At the end of the occupation, a Washington State Senator came to a ceremony to re-turn the 15 acres of land from the National government to us. So, we gave him a beaded belt and a nice one too. I and others wanted to just give him a sandwich bag of beads (hey what comes around goes around right?) But we were over ruled so the Belt was given in its place. I’M sure Ramona remembers all of this and because of her involvement, sacrifices and courage to stand up with us for her/our People, I salute you and Congratulate you for this fine award. Thank you for all of your hard and sometimes very dangerous work for the people.