The 71-year-old AIM member, who many believe has been unfairly jailed for more than 40 years, petitioned the president for a pardon in March. 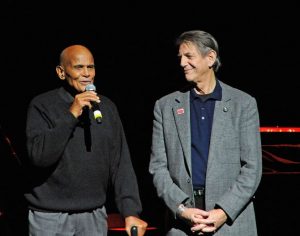 In 1977, Native American activist Leonard Peltier was put behind bars, where he has remained in federal custody for 40 years, for the murder of two FBI agents.

Yet, many have denounced Peltier’s  incarceration as a farce with a trial filled with shaky evidence at best, and an abuse of power by a vengeful FBI at worst.

The New York Daily News, which obtained an exclusive interview with Peltier, reports that Peltier, like many Indian activists at that time, was already on the FBI’s radar long before his confrontation with them because of his involvement with the American Indian Movement, or AIM.

Years later, the bureau would admit to illegally surveilling and infiltrating groups like AIM (as well as Weather Underground, Black Panthers, the Black Liberation Army and others) through its controversial counter-intelligence program, known as COINTELPRO.

Peltier, 71, has always insisted he was innocent in the 1975 altercation that left two FBI agents dead.

Peltier admits he was at the Pine Ridge Indian Reservation in South Dakota during the June 26, 1975 shootout, but says he did not fire the shots that killed FBI agents Jack Coler and Ronald Williams.

Through the years, Peltier’s case has been a bit of a cause celebre including supporters as far-flung as David Geffen, Nelson Mandela, U2, Mikhail Gorbachev and the Rev. Jesse Jackson, as well as human rights organizations like Amnesty International.