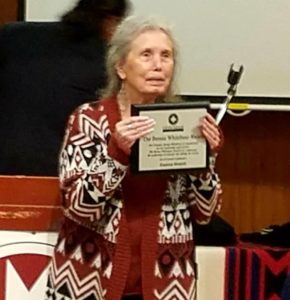 On March 8, 1970, Ramona Bennett and over 100 Native activists attempted to take over the old, decommissioned Fort Lawton army base in Seattle’s Magnolia neighborhood. Bernie Whitebear, the Colville activist who organized the takeover, wanted the government to give the property to Seattle’s underrepresented urban Indian population for a Native cultural center.

Ramona’s car was parked next to a fence on the north end of the base and the group used it as a platform to stand on. They threw blankets on the barbed wire and climbed over. Ramona, who only a year before had been elected to the Puyallup tribal council, was there with her young son Eric. She remembers Leonard Peltier, the Anishinabe-Dakota warrior and early American Indian Movement member, helped boost her over the fence. After violent clashes with military police, Ramona, Eric and many others found themselves locked up in the fort stockade.

On Saturday, April 21, 48 years after that first attempt to takeover the fort, Ramona stood again, this time as a revered elder, on the same property, now called the Daybreak Star Indian Cultural Center. This time instead of police brutality, she received public adoration when the United Indians of All Tribes Foundation honored her with the 2018 Bernie Whitebear award for a lifetime of radical Native activism.

Claudia Kauffman, the Intergovernmental Affairs Liaison for the Muckleshoot Indian Tribe, presented Ramona with the award at the gala fundraising dinner, “Native Life In The City 2018: Walking In Two Worlds.” She related a personal story about how Ramona helped her family by picking them up every year to go to powwow. She remembered Ramona would pile them into her car and feed them baloney sandwiches, Fritos and bananas.

“She kept us safe, she kept us warm, she kept us locked in our culture and our heritage and our traditions and our ceremonies,” Kauffman explained. “So personally, I just want to say thank you.”

“Ramona has been very powerfully involved in Native issues as far back as the early sixties fish wars. She’s been a strong tribal leader, a strong social worker and contributed to the well-being of people from all walks of life.”

After receiving the award, Ramona reminisced how she and Bernie Whitebear could both type fast, so they each decided to type their dreams for the Native community.

“We used to go and type our dreams for this place, and it had a treatment program and it had a clinic and it had a heritage school and longhouse daycare. We took it to the city council and we were just ignored.”

After years of suffering through poverty, residential schools and then displacement into cities, urban Native people felt the government owed them some support. When Ramona and Whitebear were ignored, the motivation to stage a takeover became strong.

Ramona described the three separate attempts to takeover and occupy Fort Lawton. “Although all we really occupied was the stockade,” she quipped.

When members of the Puyallup tribe honored her with drumming and singing, Ramona honored Bernie Whitebear by asking his sister, Laura Wong-Whitebear, to come stand beside her. Whitebear passed away in 2000.

In addition to creating the United Indians of All Tribes Foundation and the Daybreak Star Indian Cultural Center, Bernie Whitebear went on to cofounded the Seattle Indian Health Board and the Thunderbird Treatment Center.

Ramona, who was also part of the 1969 Alcatraz takeover, participated in the 1972 occupation of the BIA building in Washington, DC and the 1976 takeover of Tacoma’s Cushman Hospital and won the fight to have it turned over to Native people as a healthcare facility. Her work as a cofounder of the Local Indian Child Welfare Act Committee helped get a national Indian Child Welfare Act passed in 1978, making it possible for thousands of Native children who had been “adopted out” to find their birth parents.

Ramona continues speaking out on Native issues. She supported the water protectors who were arrested during rallies against Puget Sound Energy’s liquified natural gas storage facility currently under construction on the Puyallup Tideflats. Her testimonies at the trials of water warriors Marilyn Kimmerling, Cynthia Linet and Steve Way were pivotal in helping them receive not guilty verdicts on charges of trespassing.

Now, as Native people all over the country stand up to protect the earth against greedy corporations, the 2018 Bernie Whitebear award helps us remember the rich heritage of radical action in our own backyard, in particular a legend named Ramona Bennett.