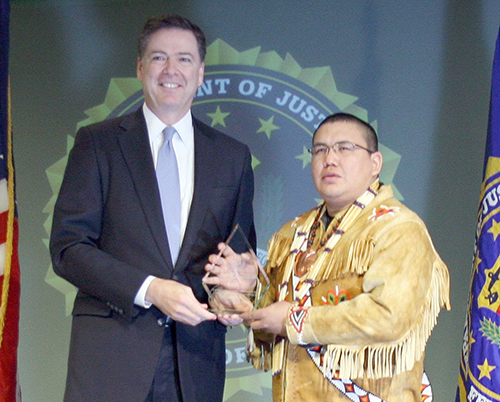 …As Johns met Comey, and posed with him for a picture, he asked something he’d been thinking about for months. He asked about Leonard Peltier.“Some people were telling me not to do it because it might spark some controversy. But I tried to say it in a peaceful way when I was right next to him, just casually bringing it up and not saying it like I’m telling him to do it. I’m just casually asking him to look into the case and, if he can, to free Leonard Peltier. And he had a real respectable answer. He said he would look into it,” Johns told ICTMN.But what would cause an Alaska Native rap artist to ask the FBI director about Leonard Peltier, the Chippewa/Sioux activist and American Indian Movement member many consider unjustly convicted of murdering two FBI special agents in 1975? For Johns the reason was simple.

“I could have just stayed quiet and soaked it all in and been happy about an award, but I felt I had a duty as a person who has a voice. I was never going to have that opportunity again. I’d probably never see the FBI director again, so what is the one thing I should bring up to him?”

As a Native man with the FBI director’s ear for only a brief moment, he felt it was his duty to ask about Leonard Peltier. From a different perspective, Johns was simply caring for another homeless Native, displaced from his people, just like the homeless Natives from Anchorage he helps with the Facebook group he founded, “Forget me not.”